Walking in to Captain Marvel I had a few key expectations:

1) To learn about this character and see her necessity in Avengers: Endgame

As someone who does not watch movie trailers, and generally avoids film reviews, I was amazed that all the other expectations of this film still managed to reach me. Apparently, I also need to judge this film according to the following questions:

1) Does it do for women what Black Panther did for black people?

2) Is Marvel providing us with anything new?

3) Can a lead character being a female superhero result in box office success? 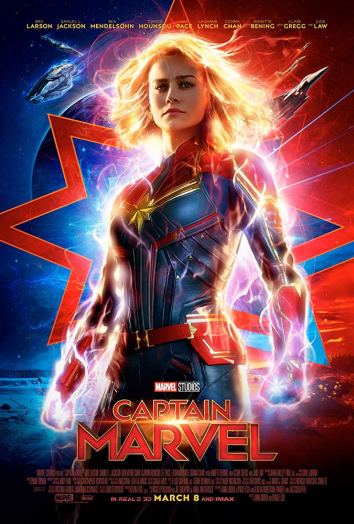 Captain Marvel follows the story of Vers (VEE-yers) aka Captain Marvel (Brie Larson), a Kree soldier who apparently lets her emotions get the better of her and needs to start using her brain more in battle. Eye roll so far. She is funny and upbeat but cannot remember her life prior to the last 6 years. Bummer. She gets a mission, action ensues but she is captured, and her memories rifled through by enemy Skrulls (lol @ name). She escapes quite awesomely but crash lands on Earth and decides to stop the Skrull invasion of Earth all whilst trying to figure out why her earliest memories seem to be of…well, Earth. She meets a young Nick Fury (Samuel L. Jackson + De-ageing Tech) and together they kinda sorta trust each other and try to a) figure shit out and b) save the world.

Did I learn about this character and see her necessity in Avengers: Endgame?

Well, she’s powerful. Really powerful. So yes? Thanos is a beast and she is a beast, so yeah? In terms of action, I did.

But really, I enjoy the character and like that she is always doing things. She always has a plan and is unfazed by much of the craziness she experiences. However, you could argue that when she is fazed and has her eventual breakdown upon discovering some sad truths that her reaction doesn’t really fit in with her character so far. The emotional breakdown is generic in script and acting so doesn’t seem like a unique way for this character to behave. If you think about how Tony Stark or Steve Rogers behave when under pressure, it is uniquely their own way. Stark becomes self-sufficient but also self-destructive; Rogers tries to be clear-headed but isolates himself.

So, although the strength of Vers/Carol Danvers/Captain Marvel blazes on screen, the writers haven’t fully mastered how to show her weaknesses, which is equally important. I hope this is remedied in Endgame because I like her and am excited to see her interact with the Avengers.

Yes. I laughed many times.

Many of the jokes are self-referential and, as the film is set in the past, there are plenty of allusions to the current state of affairs in Marvel films. Most of the characters have funny lines, including villians, hidden villains and side-characters. Unlike the Guardians of the Galaxy films, the humour is not there to show heart or bonds between characters. But it’s not like Ant-Man where many of the jokes exist to lighten the mood of the film or show certain characters’ quirks. Captain Marvel is somewhere between these.

This could be a deal-breaker for some fans who came to see a bit of drama and a film that takes itself more seriously. But this film is not it. You need to have watched previous Marvel films to get plenty of the jokes, be ready for an almost goofy Nick Fury and a healthy amount of pandering to the fans.

Personally, I had a good time. I went in not looking to be entertained on every level and did just want to unwind with a light flick that set up the next film. I expect more from Endgame than I did this film because it’s a smaller story setting up one character. Compared to Dr. Strange it’s a bloody masterpiece.

Now, on to the other questions.

Did it do for women what Black Panther did for black people?

Um.. was it supposed to? Black Panther was dabbling in Afro-futurism with the intent of setting up a whole new country, culture, political body and characters. This is a film about a pilot with laser beam powers. It’s apples and oranges.

Can Marvel stop marketing itself as the saviour of societal woes? Can we stop expecting a superhero movie to succeed in 2 hours where humanity has strained to reach in millennia?

I mean, I like seeing female superheroes and interesting female supporting characters. I like how they tied up the whole “use your head, not your heart” narrative in this particular film. I relished it. But do I expect it to change the world? Nah. I came to see stuff blow up and be pandered to.

Is Marvel providing us with anything new?

In terms of filmmaking, maybe not in this particular film. It’s more a healthy revision of all we’ve seen thus far with a tongue-in-cheek delivery and the focus on our sole hero. I feel like the last Avengers movie gave me enough to tide me over until the next one. This is a fun boost with a few interesting scenes and creative set-ups. But nothing mind-blowing.

I resent the expression “generic Marvel film”. I grew up with Batman and Robin so any Marvel film (and honestly, even slowly some DC films) are a yay! in my book.

Can a lead character being a female superhero result in box office success?

I liked it. I am content. But then again, my expectations were perhaps kept at bay.

What did you think of Captain Marvel? I demand to know.